One of the most important and misunderstood parts of the engine is the humble camshaft, this is especially prevalent in the Delta world.

You would have thought that buying expensive cams direct from the manufacturer would ensure you were buying the best, sadly this is far from the truth, so for a few years now I have been designing and using my own camshaft profiles for these engines with great success. There is a good reason for this and it is (generally speaking) the fact that a cam manufacturer is not a cam designer, the two are rarely seen together, or at least, they never actually did any camshaft development for the Fiat/Lancia engine in the last 15 years, if ever at all.

Every single engine build is different so why would just an off-the-shelf profile suit every engine? The answer is they don’t. The cam manufacturers are selling old outdated designs based on what they thought would be happening in an engine back in the 80s and 90s, they do not know how much air the port of a Lampredi twin cam will flow, how much back pressure you have or any other important criteria which you need to know before selecting the right lift, duration and overlap of the camshafts, what is more our knowledge and turbos have improved a lot over the years, there were no ball bearing turbos or compressor wheels with the materials and advanced geometry we have now, back then.

Many people fit off the shelf camshafts and report a power gain after a remap which you would expect. What they don’t know is how much power they left on the table by not fitting a better camshaft and here is the best bit; most people don’t even know the specification of the original camshaft to be able to tell if the replacements are actually any better!

How do you want your power delivery? Early turbo spool, hard hitting torque, strong mid range coupled with a powerful top end where it seems the engine just doesn’t even want to stop pulling? Or maybe you just want a gradual power delivery, which whilst being less enjoyable and powerful does sometimes suit cars which are low on grip (2wd), gives a better idle, fuel economy and emissions. Sadly we don’t have the luxury of constantly adjustable camshafts so we have to choose either or somewhere in between. In general what people want is less lag, more mid range and top end power so I tend to offer camshafts which give this. Certainly when you hit the throttle hard, the turbo spools and you are hit by a mountain of torque it makes for an exhilarating and fast car to drive as you are shoved towards the horizon as if smote by the invisible hand of God having a bad day, this is what we enjoy about turbo cars.

If you did have a 2wd car and still wanted a harder earlier and power delivery then speed or gear related boost control or more intelligent mapping is the answer, simply lower the boost limit in the lower gears, but let it have full boost in the higher gears for maximum acceleration and fun.

For some of us long gone are the days where we had to bolt something to an engine, go to the dyno, remap the engine and see what happened. Whilst you always need your experience and Dyno charts to back up what you think will happen, a lot of testing is done using Engine Simulation Software packages now. This means that if you have very intimate knowledge of an engine you can input this and then apply or change any part or camshaft profile to any engine and see what happens from the comfort of your own chair, here for instance are the figures for a standard integrale:

^^ This was built up by carefully measuring every relevant physical aspect of the engine including inlet/exhaust port flow at every 1mm of valve lift, min CSA of ports, cam duration, lift, overlap and even ramp profile have been examined, measured and entered. As the Americans say: GIGO – Garbage in, Garbage out applies very much so in this instance.

Below is a comparison between 2 profiles for the 16v engine, apart from the cams the specification was left completely standard,  the boost pressure is at 1 bar*. In the interests of fairness all cams had practically the same lifts although the Deltaparts cams are significantly cheaper. 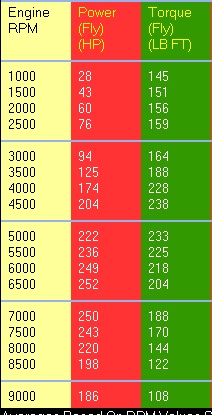 So what is the difference?

As you can see the Deltaparts cam produces 10% more power and 13.5% more torque. That is from a standard engine, apply that same percentage to a 3, 4 or 500bhp engine and you can see how much power is being left on the table.

And that isn’t the whole story, if you study the graphs carefully you will see the Deltaparts profiles have a very steep and early torque curve. Does this work in real life? Here below is a highly modified 16v engine with matching cams: 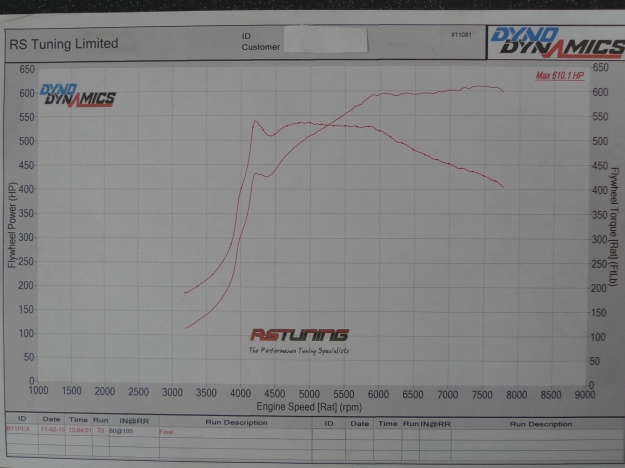 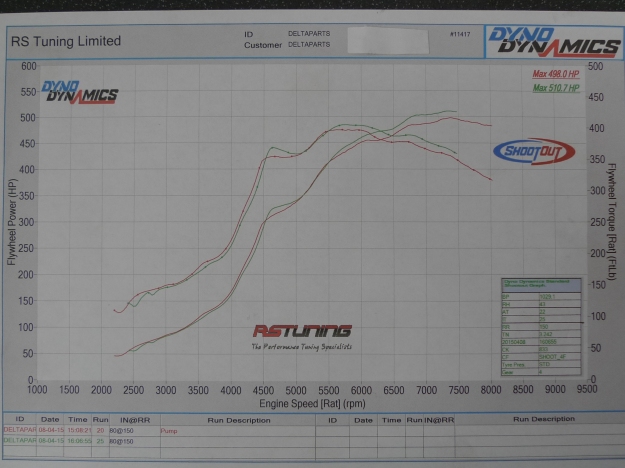 You may wonder what the dip in the power curve is, it’s basically the Dyno ‘sorting itself out’ The torque comes in so hard and fast it can’t react smoothly or quickly enough for the extreme rise, there is certainly no hole in the power when you drive it. There is a more technical explanation, but that’s for another day. The torque takes a dive near the end and power levels off on the upper graph as the map sensor only read to 2 bar so we couldn’t let the engine have what it wanted without fitting a map sensor which read further (4 bar sensor), this was a shame as it would have done more on the day – it was on course to do 650.

When all the pieces of the jigsaw come together.

*Back there I stated that the first few comparison graphs were at 1 bar boost pressure (BP), we have to consider what this means: BP is a measure of restriction. The basics of modifying an engine properly is to reduce the restrictions, this explains why the power has gone up, but the boost pressure remains the same. The turbo will be working harder to keep the measured pressure the same, but more air is going in. The intake manifold on the  500bhp engine above was showing 1.6 bar of pressure, the turbo was flat out and the engine wasn’t ‘det limited’ so needed nothing more than an intercooler to help – by this I mean water injection or high octane fuels (it was on Tesco 99). All this helps make more power because not only are we getting more air into the engine, but it’s actually cooler. So how is that then? As you already know compressing air makes it hotter, so the less we compress it the cooler it stays and as everyone knows, cooler air  = more power and greater reliability.

The other point worthy of note is the 500bhp engine is used on the street, it happily pulls at low rpms and ticks over at standard idle speed.

You can tell bullshit dyno figures when someone claims an engine is giving far more power than the injectors or turbos are are actually able to deliver,  also when an engine or a turbo gives less than what it should or the power delivery isn’t as it should be you can tell something is wrong too and it is quite often the camshaft.